This year, the temperature was around 3 C (about 29 F), there was no snow, no wind beyond a light breeze and sparse cloud cover. This was both a good thing and a bad thing.

It meant that standing out there for a couple of hours wasn’t a problem. However, there is not much light available for photography so a layer of snow and some low, heavy cloud would have brightened things up considerably. I won’t bother putting up video, it’s just a black screen. The photos are similarly dark. Next time I have a snow-free winter I’d better take along some infrared lighting.

I saw and heard nothing this time but something interesting happened. The freshly-charged batteries in my camera flashed up the ‘nearly dead’ warning as soon as I turned it on. Not remarkable in itself, those rechargeable batteries are capricious beasts and have been known to spontaneously die for no reason.

The battery in my watch died and stopped the watch at 4:22 pm. Freshly-charged batteries in my phone, my video camera and my backup camera all showed ‘last gasp’. Having one set of batteries die at an inconvenient time would be an annoyance – having them all die at the same time is too much of a coincidence.

I saw nothing, heard nothing, the night was still, the river slow. Now I think of it, I really mean I heard nothing. No birds. No rodents in the long grass. Nothing at all. There was absolutely no sign of life.

Something happened this evening and I’m not sure what. I have a feeling I’m getting close to this one. Still haven’t seen it but I am now sure I have the date, time and location right. The conditions seem better when it’s a mild winter with not too much water in the river. I suppose that would be the sort of conditions that would make it feasible to mount an attack by wading across. With no snow and no clouds reflecting the town lights, it really does get very dark at that part of the river. Again, that’s what you need to sneak up on an enemy.  Unfortunately it’s exactly what you don’t need if you’re trying to take photographs!

I have not yet examined the photos in detail. Here are a couple with the brightness increased but be aware that increasing brightness can increase pixellation and that risks forming shapes that weren’t really there. The pictures should enlarge if you click them. Feel free to download them and see if you spot anything. 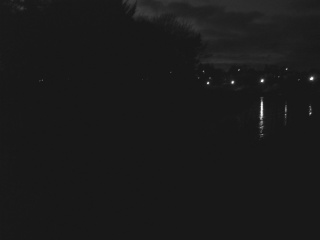 Even with the brightness increased there’s not much to see. I’m going to have to go against my own advice next year and make use of infrared.lighting. Bright lighting would just attract gawpers.

I feel as if this investigation took a step forward tonight. Not a big step, but in the right direction.

With luck, it will be mild again next year.